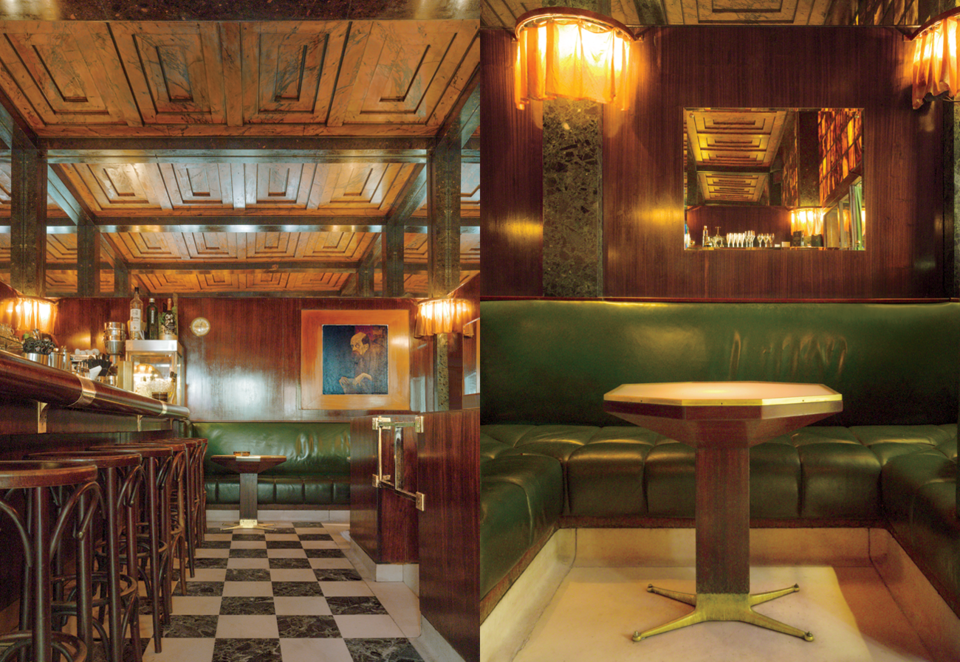 Conscious of my article about ladies powder rooms and their design schemes, the irony is not lost on me now as I reference the work of Austrian Modernist architect and interior designer Adolf “Loos”.  A mere coincidence I assure you.

Less of a coincidence, and more a decree of history and design theory, is the influence Adolf Loos’ (1870 – 1933) interior schemes have had on commercial interiors in Dublin. Primarily known as one of the most influential 19th Century European architects, Loos had a passion for decorative arts, albeit minimal and devoid of ornament, and there is much in his portfolio which showcases this.

One of his most famous projects, is his tiny Kärntner Bar in Vienna, which he completed in 1908. It is an exquisite example of his trademark. It has simple lines and form, smooth and clear surfaces, and luxurious, polished materials, and the result is an elegant, sophisticated, unassuming, style.

With just a few bar stools and a small number of table booths, the cosy bar is dark and atmospheric. Simple geometric techniques are used to great effect to create a sense of space. A coffered ceiling draws the eye up, and while decorative and acting as a focal centrepiece, it also provides for a division of the room into sections. Strategically positioned mirrors give a bouncing optical illusion, opening up the room, while a green marble and white chessboard floor runs throughout, seemingly running forever.

Rich hues of dark greens, browns and gold add to the mannish atmosphere. Though without much natural light, fixtures are kept low and atmospheric so the bar is cosy and dimly light. Opulent materials like marble, onyx, mahogany, brass and gold, and silk wall lamps, catch the eye and refine the finish. This masterpiece is known the world over and even featured in TV advertising for Gucci.

“Be not afraid of being called un-fashionable.”

The Kärntner Bar is known to many Dubliners, but maybe not all, as the inspiration for a very small, institutional bar in one of Ireland’s finest universities, Trinity College! In fact, Dublin’s most famous landmark has a complete recreation of Loos’s establishment, open only to a few privileged scholars and academics.

Following extensive fire damage to Trinity’s Senior Common Room in the early 1980’s, Irish architects de Blacam and Meagher paid as great an homage as can be given to Loos, unveiling in 1984 an almost exact replica of the small, perfect, Viennese bar. The Loos Bar, which follows in some sense all of Loos’ design approaches, is still in use today, for staff and scholars of the college one and is rarely open to the public, adding another level of intrigue and privilege.

For those few “non” Trinity scholars amongst us, who may not get a chance to experience Dublin’s Loos Bar, can find something akin to the world of Loos and cosy, hidden Speak-easy style lounges, in a bar under St. Stephens Green, the establishment of 9 Below.

Though much more contemporary, 9 Below is atmospheric and cosy. Channelling the same rich materials used by Loos; polished walnut panelling, brass trims, mid-century leather and velvet furniture, and low lighting, this stylish bar by Dun Laoighaire design house O’Donnell O’Neill is an altogether sophisticated affair. Opened in 2017, while it doesn’t yet have the historical significant of our other Loos bars, it certainly revokes Loos.

Dtale is a series of interior design tales, telling the story of interesting and impactful design approaches, through history, society, and sometimes, just a little humour.