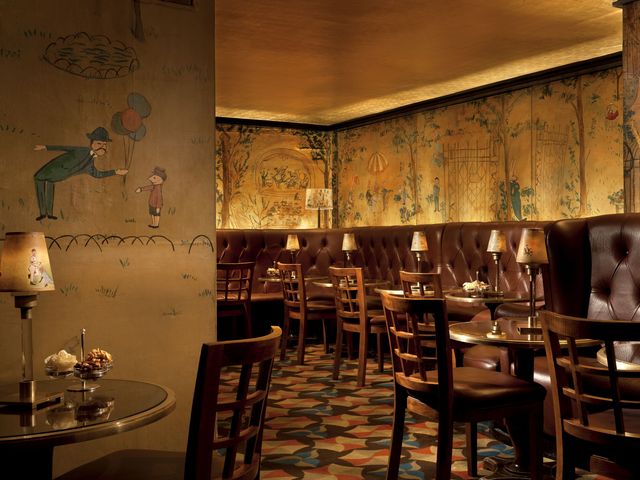 Lately, large murals are mostly the work of cult graffiti and modern artists. Usually depicting a cultural or societal tale, the bold illustrations light up the exterior of trendy company buildings, dilapidated properties and vacant street-scapes, until such a time it’s removed, remodelled or repainted.

The history of wall murals in interior design took an interesting turn in the early twentieth century, when a number of fine American hotels and hospitality establishments approached famous artists to create huge artworks to lavish their interiors. Murals depicted history, societal references, fantasy or imaginary stories, and were the work of such popular US illustrators like Maxfield Parrish and Dean Cornwell. In a world with rapidly changing trends and tastes, a mural, painted on-site, had the permanency and deep rootedness within a space, a point of huge interest, showing commitment and longevity.

Interestingly, while some artists shunned the work within a bar setting as beneath the vanguard of their other, more valued, galleries, they took the jobs to make ends-meet, or in the case of Ludwig Bemelman, for his mural at the luxury Carlyle Hotel on the Upper East Side, Manhattan, in lieu of accommodation for the year and a half that he worked on it.

A writer and illustrator, Bemelman found fame creating and telling the whimsical tales of heroine Madeline and her travels. He completed the charming barroom mural at the Carlyle in the 1940s. It depicts Central Park, and many of its furry animals and everyday park scenes, in Bemelman’s floaty, romantic style which transformed the mood of the room. In 2002, famed interior designer Thierry Despont revived the bar’s Art Deco elements to compliment the mural; glass black tabletops with nickel finish, black granite bar, brown leather banquettes and gold-leaf covered ceiling. A fitting frame for Bemelman’s only public artwork.

Another favourite of arty bar aficionados is the massive mural by Maxfield Parrish, at the St. Regis New York, John Jacob Astor’s ornate Beaux Arts monument. “Old King Cole”, who was a “merry old soul” calling for his pipe and bowl, was painted in 1906, and adorns the rear of the bar space at The King Cole Room on Fifth Avenue. Rumour has it a disagreement between hotel owner and painter over remuneration, whereby Parrish subtlety added some new, less tasteful traits within the art scene as a nod to his annoyance. Sneaky!

The fascinating history of these murals will have inspired many modern projects. A magnificent example of tying history into a contemporary design scheme comes from Kit Kemp, the famed UK interior hospitality designer, who recently tookover the seventh floor of Bergdorf Goodman in New York with her furniture, fabrics, textiles and home accessories.

At the Oscar Bar and Restaurant in the Charlotte Street Hotel, Fitzrovia, London, this colourful mural adorns three sides of the room. Painted in 2000 by British visual artist Alexander Hollweg, who worked with Kemp to research and design a fitting, mural. It has many fantastic icons, references and touchpoints from the local Bloomsbury set. “I’m hoping that this mural will last longer than we do. It’s very much an intrinsic part of the hotel and it’s never in fashion so hopefully it will never be out of fashion.”, said Kit Kemp.

No doubt, the team at Bryan O’Sullivan Studio in London also delved deep into the archives of barroom art during their research for its work on the refurbishment of The Berkeley Bar & Terrace at west London hotel The Berkeley. The snug features an incredible wall mural by Brooklyn based artist TM Davy.

Many faces peer from a pastel toned mural, a focal point of the bar. Irish man, and 2020 Elle Décor Interior Designer of the Year, Bryan O’Sullivan’s bowed and rounded finishes on the choices of other furnishing within the room compliment the rose tinted mural. Dezeen Magazine said, “Depicting a series of female faces with “mysterious and knowing expressions”, the artwork makes reference to snugs found in old pubs where women would withdraw to socialise and enjoy alcoholic drinks without judgement.”

Renowned, historical wall murals that remain in bars or barrooms, are few and far between. Establishments have closed up, been reconfigured or renovated, and with them the stories in the murals. Thankfully some remain to tell the tales. Having these beautiful wall murals in public spaces like bars and hotels, gives many of us the chance to see wonderful artists’ work in the setting in which they created it. That is, if we can afford the cocktail!

D-tale is a series of interior design stories, the tales of splendid and fascinating places where history meets creativity. Follow me on Instagram.