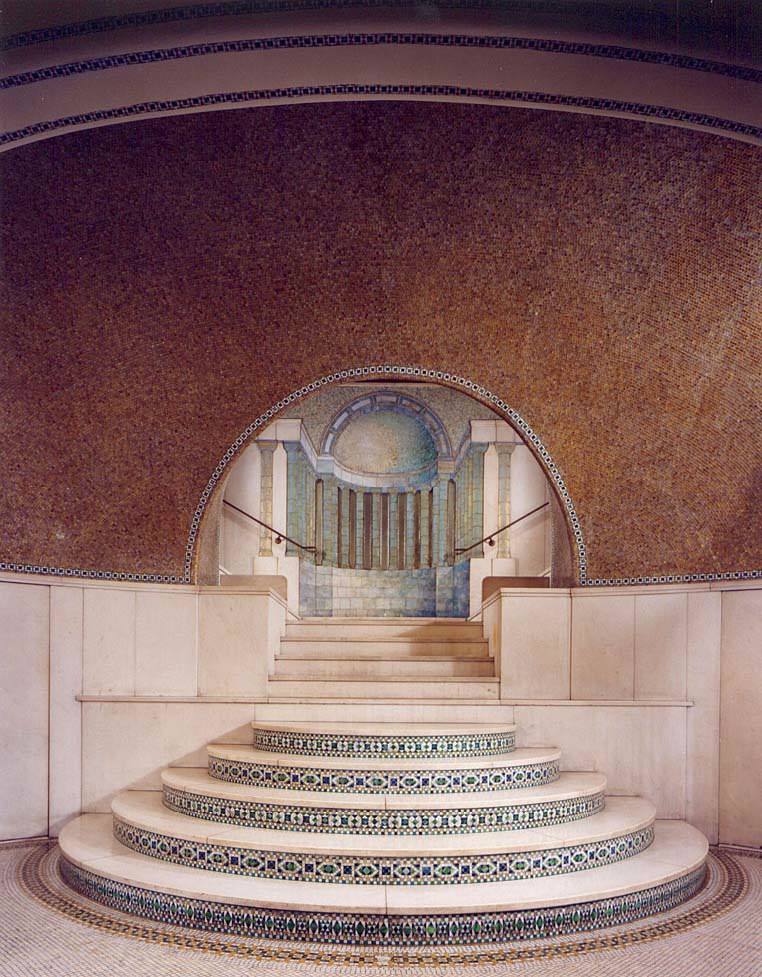 Nestled amongst Louis Vuitton and Chanel in Dublin’s Brown Thomas department store, Tiffany & Co glistens as the renowned jewellery store, founded in New York by Charles Lewis Tiffany in 1837. A renowned leader in commerce and retail, Tiffany came from a modest Connecticut upbringing and worked hard to create the hugely successful company. With his wife Harriet Young, they had six children, and it’s about their third born, Louis Comfort, where our attention lands for this design story.

One of the most fascinating interior designers in American history, Louis Comfort Tiffany (1848 –1933) was an incredible, multi-faceted designer. His artistic flairs included painting, interior design, glass crafts and architecture, and he excelled in each. Probably most recognised for his stained glass window and lamp creations, the Tiffany Lamps, it was his opulent interior design work that signalled the American Aesthetic Movement, a contrast to fussy, overbearing, and conservative Victorian traditions.

Born into prominence given the success of Tiffany & Co, Louis Comfort trained early as an artist and studied design. In 1879 he joined with other designers and craftspeople such as Candace Wheeler, Samuel Colman, and Lockwood de Forest to form Louis Comfort Tiffany and Associated American Artists, a collective of artisan talent which fuelled creativity and ideation. The group made designs for wallpaper, furniture, and textiles, with Tiffany’s focus, on glass wear, stained glass and lamps.

The group are responsible for what the New York City Landmarks Commission has described as “the single most important collection of 19th century interiors to survive intact in one building.” That of the Upper East Side’s Park Avenue Armory’s magnificent interiors, completed in 1881.

The Armory served as a military, cultural and social centre for the prestigious Seventh Regiment as well as the New York society of the Gilded Age, and is still in use today. . The magnificent Board of Officers Room and Veterans Room, are described as “Greek, Moresque, and Celtic with a dash of the Egyptian, the Persian and the Japanese.”

The Library room was designed by Tiffany with designer Stanford White (more on White anon!). This room is largely thought to be White’s design except for the windows and lighting fixtures by Tiffany. It features a basketweave barrel vault originally painted salmon color with silvered discs.

The incredible results impress and inspire, and remain today given the ongoing efforts by commissioned architects Herzog & de Meuron, to restore and renovate the rooms.

The work of the Associated Artists thrived, with Tiffany completing work for Mark Twain, and indeed President Chester A. Arthur’s White House in 1882. Tiffany redecorated a number of rooms on the State Floor including the Entrance Hall, the Red Room, and the Blue Room.

Tiffany wowed with the use of a glass screen, featuring topaz, ruby, and amethyst jewels set into the glass alongside four eagles and a shield with the initials “US.”

Given this prominence, Tiffany was commissioned by many in East Coast high society to design homes, ecumenical buildings and business premises and he was called the “most fashionable purveyor of taste” during America’s Gilded Age.

A fine example of this lavish, opulent work, which can still be seen today, is the overwhelming interior of the Ayer Mansion in Boston’s leafy Back Bay.

The stage like main hall, with cream plasterwork and glass mosaic is both Oriental and Greek in style. “At the Ayer Mansion, Tiffany-designed stone and glass mosaics, graceful metalwork, Favrile glass vases, custom furniture, intricate plaster work, elaborate art glass windows, and unexpected architectural flourishes all work together to create a cohesive masterpiece,” as it is described by the National Trust.

Built for self-made textile and marketing guru Frederick Ayer and his second wife, Ellen Barrows Banning, an amateur actress, the entrance even features a proscenium, from which Ayer’s youthful bride (30 years his junior) could recite.

Another excellent example of the grandiose nature of Tiffany’s creations, is the impressive and still intact art glass dome in Chicago’s Cultural Centre at Preston Bradley Hall on West Lawrence Avenue.

It is one of the world’s largest glass domes with 30,000 pieces of Favrile glass, each shaped like a fish scale. It is 12 meters in diameter and 93 square meters in total, and a stunning and complex example of impactful glass and light design.

Thankfully we still have these marvels to enjoy, while other masterpieces were knocked down or destroyed.

One of the greatest pities, is the absence of Laurelton Hall, Tiffany’s Long Island home in his later years. The 84-room mansion on 600 acres of land, designed in the Art Nouveau style, was said to be a work of art in itself. It also served as a residential school for artists, the Tiffany Art Foundation, in the 1910’s.

It goes that that Tiffany built the magnificent home for his close companion in later years, his nurse, caretaker, and friend Ms Sarah Eileen “Patsy” Hanley from Rathlee, County Sligo, Ireland.

Be it for love or affection, the incredible historical images of the property show the wonders of Tiffany’s creativity and workmanship. The couple lived together at Laurelton Hall for the next 20 years. While it sadly burned to the ground in 1957, the love story lives on.

D-tale is a series of interior design stories by Deirdre O’Connell, the tales of splendid and fascinating design places where history meets creativity. Follow me on Instagram.